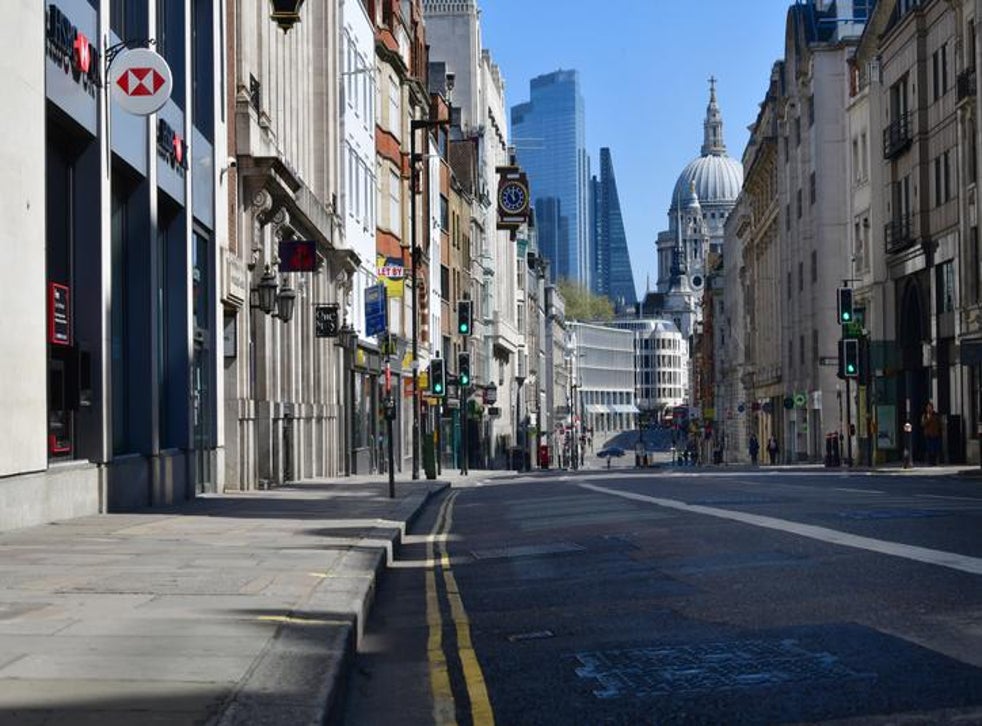 Central London’s dry cleaning firms could be the next casualty of the coronavirus crisis as workers continue to stay away from city centres, the industry has warned.

A sustained drop in the number of office workers and tourists visiting central London could put many dry cleaning businesses at risk of closure.

With a higher number of people testing positive with Covid 19 over the last week another lock down can put these businesses past the point of no return.

The History of Dry Cleaning Solvents

We have taken a look at the history of cleaning and some of the chemical used in the process.

Washing with water has always been used to clean clothes. Early civilisations often found themselves tirelessly washing garments down by the local river, where they would beat them over rocks, scrubb them with abrasive sand or stone, and pounded with wooden implements. However with the introduction of fine cotton and some other fibre based clothing, water just wasn't good with the more tailored style of garments, causing shrinking and often distorting their appearance

Interestingly, Romans took cleaning to a new level by making washing into a commercial industry and the demand was extremely high as the Romans placed a great importance on their hygiene and physical appearance. This led to the introduction of Roman fullers who dyed, washed and dried all types of clothes and became an indispensable part of Roman life. The fuller would stand with his feet in a tub filled with water and a mixture of alkaline chemicals and this would sometimes include ammonia derived from urine!

In 1855 dry cleaning as we know it was discovered by Jean-Baptiste Jolly by complete accident. He noticed that his table cloth became cleaner after his maid had accidentally overturned a kerosene lamp on it. Operating through his dye-works company, he went on to offer a new service and called it "dry cleaning."

Prior to this in 1821 a non-gasoline based solvent perchloroethylene (perc) was discovered by a chemist called Michael Faraday, but is was only introduced as a commercial dry-cleaning solvent in 1934, and went on to become the leading dry cleaning solvent by 1962. In the 70's and 80's Japan and the US respectively introduced restrictions due to the environmental and health issues associated with it.

The dry cleaning industry was also using R113 (fluorocarbon) which is excellent on beaded garments and delicate and used the symbol F in a circle, however it was shown to have too much CFC and therefore un-friendly to the ozone. Thereafter the only other alternative was to go back to basics R111 (hydrocarbon) which is basically the alternative to Perc nowadays. 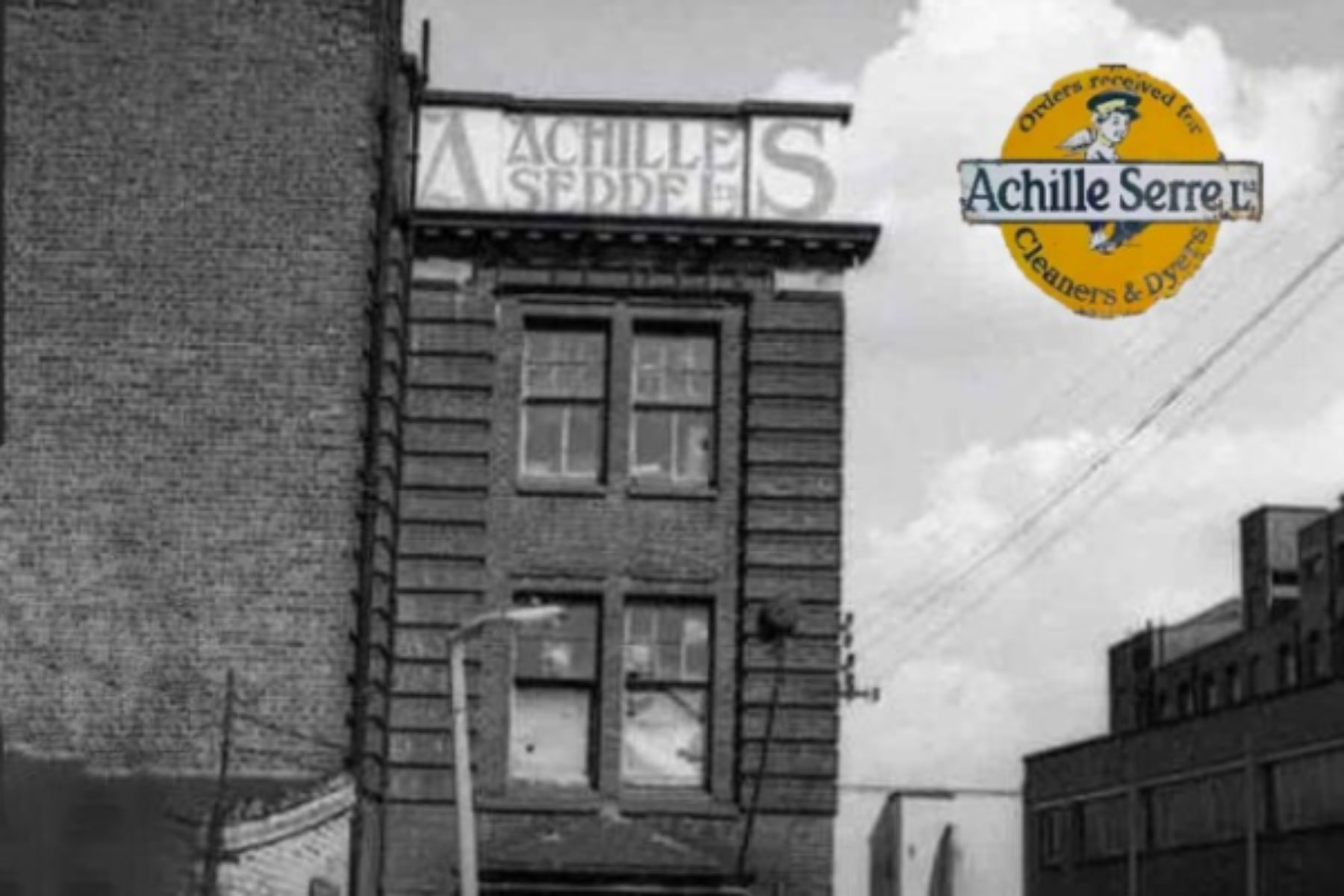 The dry cleaning industry in the UK has a truly interesting history when in 1870 Parisian Achille Serre and his wife Eugene left France for England.

Achille was originally a ribbon dyer by trade and set up his first premises in White Post Lane, Hackney. In 1876 Achille moved into garment dyeing and then introduced the new technology of cleaning with the use of solvents. and launched the term “dry cleaning” to England.

Achille and Eugenie’s son Eugene took over the business in 1882 and went on to expand the company. Eugene, like his father was an entrepreneur and took the company through many changes, including floatation on the Stock Exchange. The business premises ended up in Walthamstow, a major district in North East London

The company continued to grow and helped develop new solvents. The business went through challenging times and none more so than changing consumer behaviour, which saw the firm develop retail outlets to complement the factories. At the businesses peak it employed over 1,500 people in its factories and 400 outlets.

Sadly, Eugene eventually resigned in 1934, following a major disagreement with the board

The demise of paper vouchers

The feeling of uncertainty and angst when handing over a paper voucher to a cashier is a common one for UK consumers. Yet, with nearly 80 percent of the world’s population currently using a mobile phone, there is no denying that mobile payments are transforming the way consumers shop. Retailers now see mobile marketing as an emerging opportunity for influencing consumers’ purchasing behaviour, leading to more app integration and the slow but steady demise of the paper voucher.

What is ‘Paper Voucher Stigma’?

Running the risk of a retailer refusing to accept your paper voucher or the realisation that your voucher has expired can be embarrassing and is a common concept recognised as the ‘voucher stigma’. In addition to paper vouchers being delicate, easily lost and damaged, makes the handing over of a worn piece of paper somewhat out of place in the modern world. Today’s consumer activity is led by contactless, pin-free payments and easily accessible apps, making it evident that the death of the paper voucher is upon us. So, what can we gain from mobile retail applications?

The Benefits of Mobile Retailer Apps

Paying easily and safely are the main contributing factors to paying via app. Not only are apps convenient and free to use (for the majority of retailers that provide them), they’re also easy to access. All you need to do is download the app to your mobile device in order to get started: 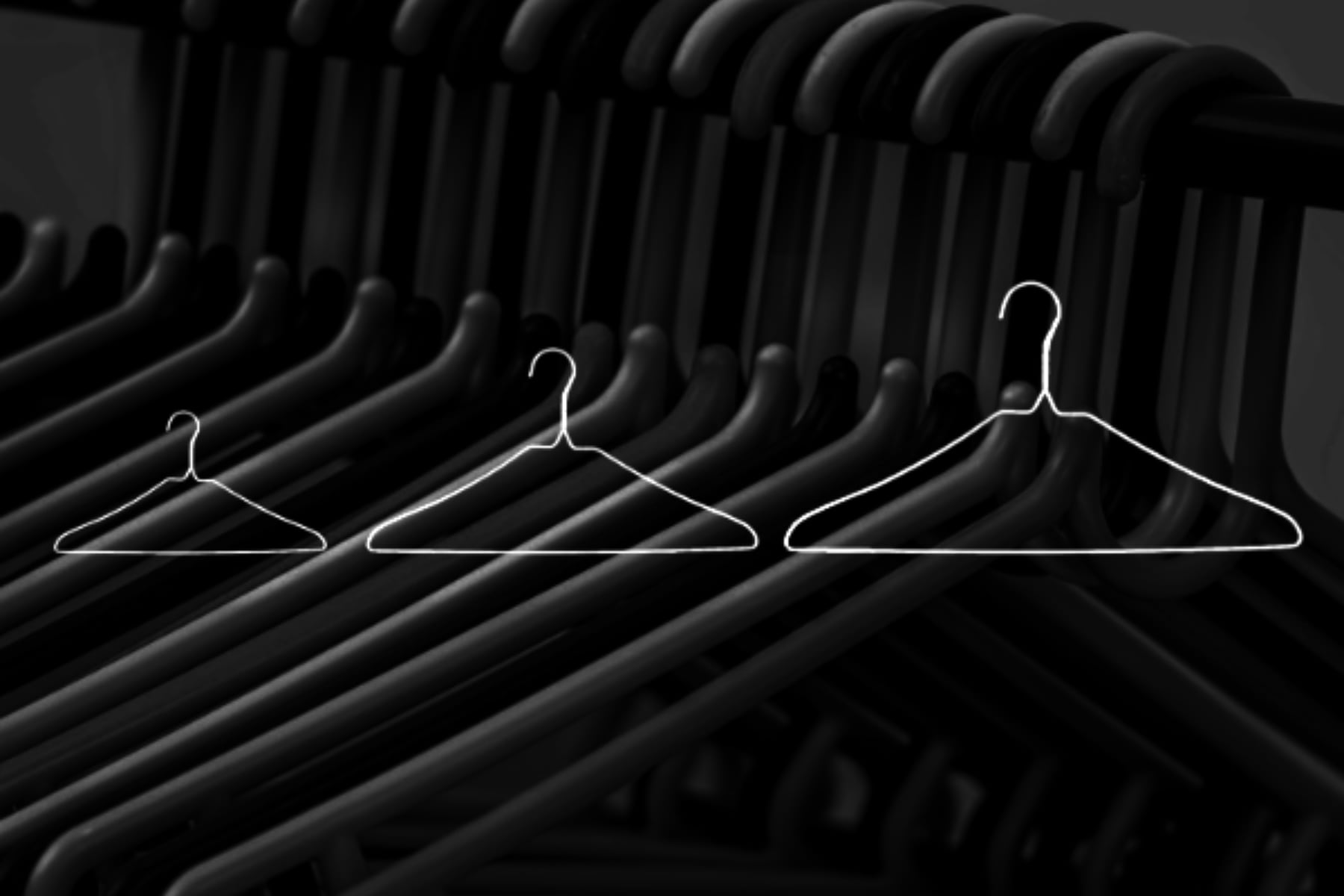 The Evolution of a Clothes Hanger

Clothes hangers are simple and vital item to everyday living, but where did they come from?

Interestingly, the wire hangers we often get from our dry-cleaners today were originally inspired by a clothes hook that was invented by O. A. North of New Britain, Connecticut in 1869.

Albert J. Parkhouse an employee of Timberlake Wire and Novelty Company created the coat hanger in 1903 after arriving at work to find that all coat hooks were taken. In his frustration he bent a piece of wire into two ovals with the ends twisted together to form a hook. He patented his invention, but it is not known if he ever profited from it.

In 1932, fellow American Schuyler Hulett, used cardboard tubes mounted on the upper and lower parts of the wire to prevent unsightly wrinkles. This was then added to by Elmer D Rogers who created a hanger with a tube on the lower bar which is still used today.

The development of the clothes hanger has continued over the last 70 years with plastic hangers being the most popular for household use. It keeps its form and provides a thicker bar for the clothes to rest on.

High end clothes hangers are made from wood and formed to take the shape of shoulders, you will find these in the expensive retail stores selling suits and coats.

Over the last 50 years clothing displays have become a large part of the retail industry and companies pay careful attention to the manufacturing of clothes hangers.

We now have hangers with clips to pinch the clothing at the hem rather than crease the clothes over a bar and hangers with loops and notches to provide clothing straps or loops with a place to rest. 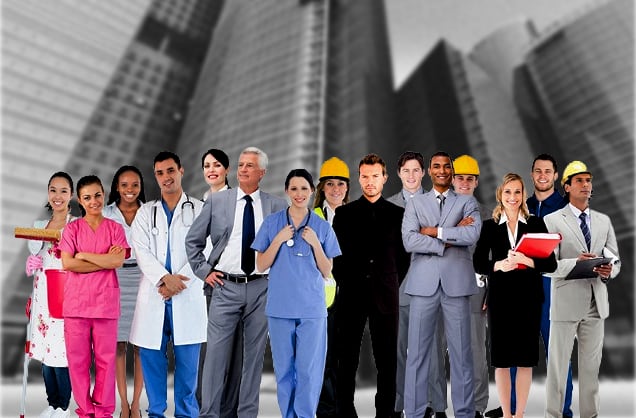 How to ensure your PPE is safe

Personal Protective Equipment (PPE) has an important role to play in today’s working environment, but how do you guarantee its safety? PPE helps to reduce exposure to risks when administrative controls and engineering controls are not effective enough to keep employees safe. Compliancy, correct sizing, premature deterioration, laundering and extending its life span through regular upkeep are all important factors to consider.

Whether you work in the construction industry and require two-tone hi-vis waistcoats, safety hats and safety boots for your staff, or you work in healthcare and require gowns, aprons and masks, you’ll find that your employee’s PPE requires special attention from the moment it arrives.

With the recurrent use of personal protective equipment, particularly workplace uniforms, it’s important to ensure that the recommended clothing and equipment is fulfilling the role it was designed for. Without regular upkeep, employees may find their uniform loses its effectiveness and poses a safety risk.

How is it laundered?

Employers will need to follow the manufacturers’ instructions for laundry and cleaning, which in most cases will require professional laundry and dry cleaning services that specialise in industrial PPE cleaning

In order to ensure compliancy never allow exemptions from wearing PPE and be sure to take note of any changes in equipment, materials and methods, as you may need to update the PPE that you provide to your workforce. 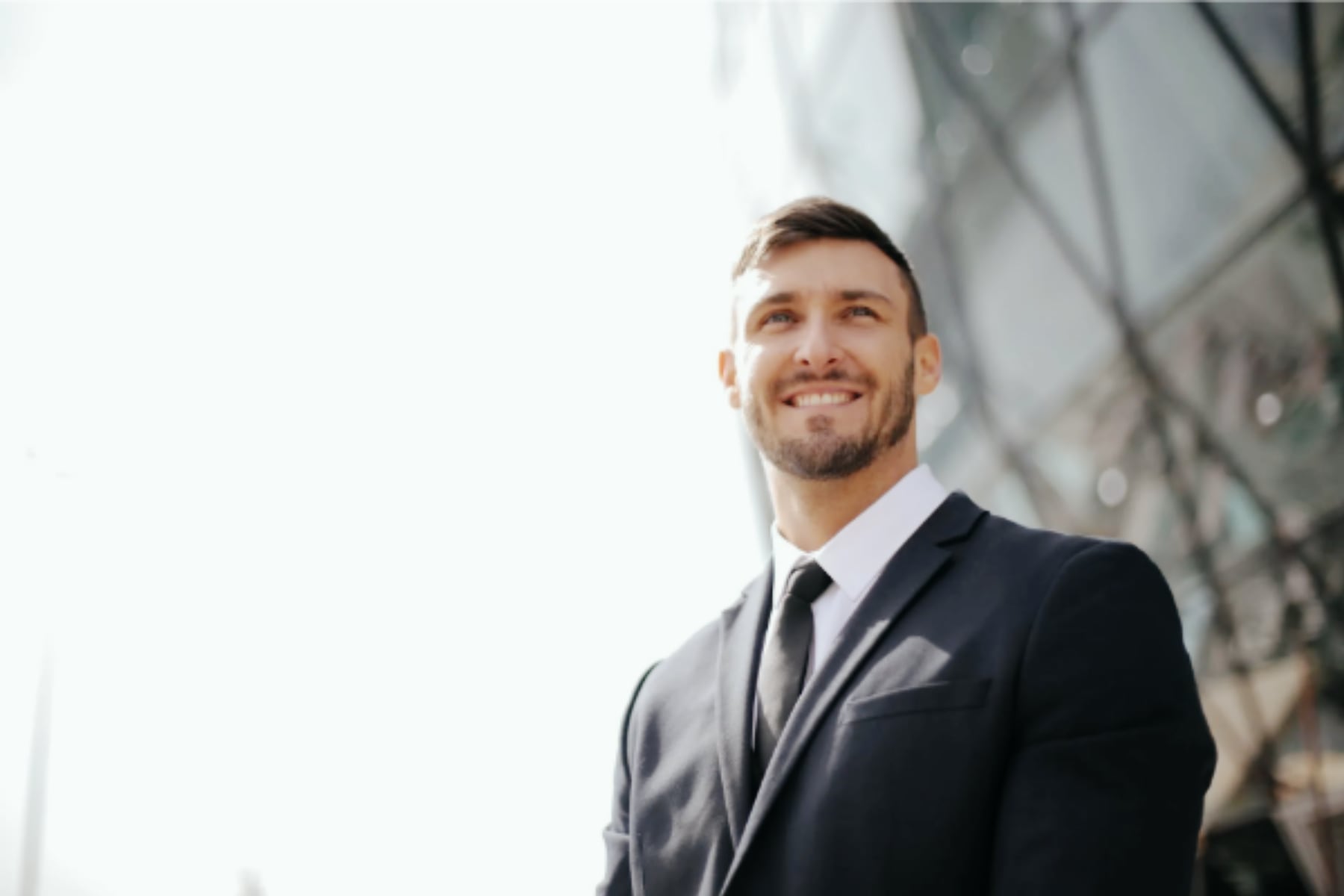 The uniform is an important tool within any workplace. It isn’t simply something that’s worn by employees, it portrays a great deal more than that, from corporate branding to projecting competence. When an employee wears a uniform, it represents a great deal of things from their profession, to the company they work for and the service they provide.

With workwear possessing so many advantages, how do you ensure it remains effective, clean, long-lasting and a true reflection of your brand? Here we’ll discuss each of these factors in more detail: